Twas the night before Thanksgiving

Thanksgiving Eve is my favorite holiday of the year! It seriously is.
What other holiday has a preschool feast complete with Indian (Native American) headdresses- 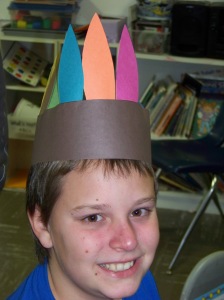 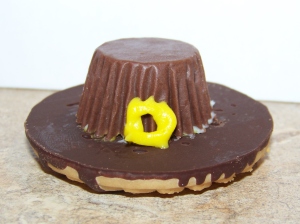 And once the work is done, the fun can begin! 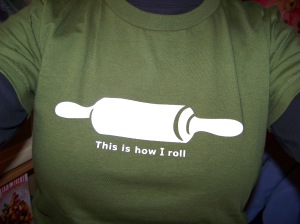 It really is. And yes, I just posted a picture of my chesticle area. Deal with it.

I started with making two kinds of cranberry sauce.  I made two mostly because I found a recipe that called for cooking the cranberries with maple syrup and I couldn’t not make it.  It had MAPLE SYRUP.  I seem to have become slightly obsessed with maple syrup. (I just typed “upset with” instead of “obsessed with”. What does that mean?? Is it some kind of Freudian slip and I really am upset with maple syrup? Is it just too sweet? Do I resent the hold it seems to have over me? Do I hate that it is so expensive? For the life of me, I can’t find that I have any quarrel with the lovely maple syrup!) Anywho.  I find maple syrup makes just about everything better. That tree sap is magical stuff!  (recipe at the end of this post) 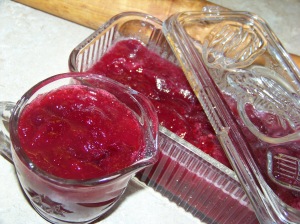 Next was  a French Silk pie (which sounds an awful lot like something you would find in Victoria’s Secret. (Well, not *you*. I didn’t mean to imply that *you* would shop at a store like Victoria’s Secret. Not that there is anything at all wrong with Victoria’s Secret.  *You* do whatever it is that floats *your* boat, sister. And if shopping at VS makes *your* ship sail, then bon voyage, indeed!) After all of that, I have to tell you that there is no picture of the French Silk decadence.  It’s not so photogenic, poor thing.  But what it lacks in prettiness, it makes up for in tastiness. I reminded it that pretty is as pretty does and it seemed to feel better.  I think tomorrow it will be the belle of the Thanksgiving ball.
But the Apple Crumb pie, now it’s all smilin’ and wavin’ like a damn beauty queen-

Apple Crumb-the most photogenic of pies

Then for dinner, I made calzones.  I don’t know how I know how to make calzones, I just do.  I am a calzone savant. No pictures were taken of the calzones because the boys basically ate them as I was pulling them out of the oven.  It’s a miracle that they didn’t burn off all of their taste buds!
Tomorrow I will make the pumpkin pie and the corn casserole.  Paula Deen’s corn casserole!  Not literally her corn casserole.  She can make her own flippin’ casserole!  Or have one of her minions make her a corn casserole. Because if anyone has minions, it’s Paula Deen.  And she feeds them butter.  This is just her recipe for corn casserole. (wordpress [or is it the minions?] is not letting me set up a link tonight. Just google that and it will come right up for you, if you’re interested.)
On that note, I think it’s time for me to head to bed.
I know this recipe might be a little late for you to use tomorrow, but there’s always Christmas!
Cranberry Sauce

Wash cranberries and put into a medium saucepan.

Add 1 cup of orange juice (or whatever juice you choose).

Stir together and turn heat on high until it reaches a boil.

Once it comes to a rolling boil, turn the heat down to medium low and continue cooking over lower heat for about 10 minutes, or until the juice is thick. Turn off the heat.

3 responses to “Twas the night before Thanksgiving”